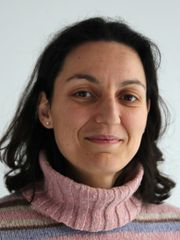 There is currently an opening for a HiWi (student assistant) in the field of computer simulations of modified surfaces (molecules adsorbed on surfaces).

Our work is based on a variety of computational tools, ranging from classical (Monte-Carlo schemes within empirical potential approaches, Molecular Dynamics), semi-empirical (parametrized tight-binding schemes), quantum mechanical (implementations of the density functional theory also in conjunction with non-equilibrium Greens functions for quantum transport), and multiscale methodologies (coupled Langevin molecular-dynamics and lattice-Boltzmann method for modeling molecular motion in a fluid solvent). A brief description of our research projects are given below. More details can be found in http://www.icp.uni-stuttgart.de/~mfyta/projects.html

With the aid of quantum transport simulations we are able to reveal the electron transmission and conductance across functionalized metal electrodes. We are investigating the efficiency of such a device to detect and identify biological molecules. The specific interaction of these molecules with the functionalzation unit of the electrodes plays an important role for the sensing mechanism.

2D materials, the transition metal dicholgenides (TMDs), are being investigated. These are single monolayers which can be made of a variety of chemical elements and can form metallic as well as semiconducting phases. Our studies aim to explore the polymorphicity of these materials in view of a number of potential applications in nano electronics. We directly connect the structural characteristics of materials based on the TMDs to their electronic and transport properties.

Adsorption of molecules on surfaces

The interaction of molecules with metallic and diamond surfaces is investigated. The bonding characteristics are revealed as well as the morphology of the modified surfaces. STM images and the charge redistribution due to the adsorption are studied and can give a clear insight into the underlying physics of these materials.

A high interest on carbon-based nanomaterials has led us to a variety of relevant studies, some of which are outlined here:

We turn our interest to nanocage diamond structures, named diamondoids and investigate their properties by means of ab initio and Molecular Dynamics approaches. We focus on the free standing crystallites, try to tune the properties through functionalization and doping. Electronic and transport properties are of a high interest. We have also shown that stable diamondoids can also be formed using boron and nitrogen instead of carbon.

Density-functional theory based calculations have allowed us to take a closer look into the negatively charged NV center in diamond. We give an estimate of the energy sequence of the excited state and calculate the hyperfine tensors in the ground state. The results have important implications on the decoherence of the electron spin which is crucial in realizing the spin qubits in diamond.

Using Monte Carlo and tight-binding Molecular Dynamics simulations we have investigated nanostructured amorphous carbon materials. These are composites, which consist of a crystalline carbon inclusion embedded in an amorphous carbon matrix. The inclusion may range from pure diamond nanocrystals and sp3 crystalline structures to sp2 conformations and carbon nanotubes. We have looked at the stability, elastomechanical and fracture properties of such materials. These properties can be tuned by an optimal choice of the type and radius of the inclusion, as well as the density of the matrix.

Using a variety of computational schemes ranging from density-functional-theory-based calculations to coarse-grained approaches we model biologically modified materials. These biomaterials consist of a material part, a surface or a nanocrystal on which a biomolecule has been attached. We investigate the stability and optoelectronic properties of these biologically modified materials in view of the variety of novel applications these can form, in bio-sensing, DNA-labeling, etc.

The differences in the energetics between matched (Watson-Crick) and mismatched DNA base-pairs are indicative of the mechanism according to which the RecA protein reads a DNA molecule. Our work is based on quantum mechanical calculations.

A potential for DNA nucleotides

Using an ab initio scheme we have generated a coarse grain potential for DNA bases and base-pairs. The interactions take into account base and sequence specificity, and are decomposed into physically distinct contributions that include hydrogen bonding, stacking interactions, backbone, and backbone-base interactions. Within this model, each nucleotide is reduced into two sites, the DNA base site and the sugar-phosphate site. This model is not derived from experimental data, yet it successfully reproduces properties of the stable B-DNA. It may be used to realistically probe dynamics of DNA strands in various environments at the μs time scale and the μm length scale.

We use classical Molacular Dynamics simulations to model ionic solutions in water. Starting from the free energy of solvation of the single ions, perform a parameter scan and try to tune the thermodynamic properties of the respective salt solutions. A good optimized force field is the one that reproduces the relevant experimental data. For some of the ions finding a "good" force fields was not possible. We could overcome this, by also scaling the ion-pair mixing rules that are taken into account in this methodology. We have applied this approach to monovalent, as well as divalent salt solutions.