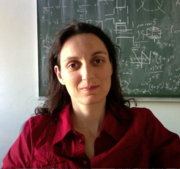 Our work is based on a variety of computational tools, ranging from classical (Monte-Carlo schemes within empirical potential approaches, Molecular Dynamics), semi-empirical (parametrized tight-binding schemes), quantum mechanical (implementations of the density functional theory), and multiscale methodologies (coupled Langevin molecular-dynamics and lattice-Boltzmann method for modeling molecular motion in a fluid solvent). A brief description of our research projects are given below. More details can be found in http://www.icp.uni-stuttgart.de/~mfyta/projects.html

Using a variety of computational schemes ranging from density-functional-theory-based calculations to coarse-grained approaches we model biomaterials. These biomaterials consist of a material part, a surface or a nanocrystal on which a biomolecule has been attached. We investigate the stability and optoelectronic properties of these biologically modified materials in view of the variety of novel applications these can form, in bio-sensing, DNA-labeling, etc.