Difference between revisions of "Polyelectrolyte Multilayers"

In close collaboration with experimental investigations from groups of Prof. von Klitzing and Prof. Hugel, we are currently working to investigate the inner structure and dynamics of a small layer number of PEMs via all-atom (AA) and coarse-grained (CG) simulations. The AA level simulations proved to be consistent with existing experimental data on chain conformation of adsorbed poly(styrene sulfonate) (PSS) in PSS monolayer systems, dielectric permittivity and diffusion constant of water in PSS/PDADMA polyelectrolyte complexes (PDADMA stand for poly(diallyldimethylammonium)). 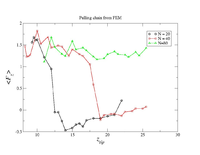